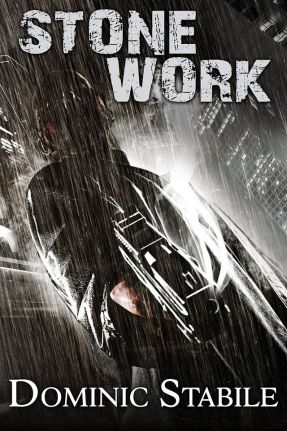 Stone Work is a cool, futuristic set of stories about a man-for-hire by the name of Stone. He’s been through hard luck and cheap shots, and survived a place they call, “The Wall”. Slightly disfigured, with a new found admiration of shooting the people he’s paid to, and hanging with his tech girl, Megan, Stone is just trying to get his while making it to another day.

Stone Work is a collection of three tales.

“‘Roid Rage” sets things off. We come into the story learning what we can of this cool character and his life. This one starts in one direction and then drops you into a world of mutated freaks, which Stabile has a lot of fun with, making you wonder how the heck Stone and Megan are going to get out!

“Plumb Inc.” was interesting, but not as good. It has a great direction, but for whatever reason, felt too rushed or short or…just not pushed to the borders of its potential.

“Godless City” is by far the winner of the batch of stories. This one, as with the previous stories, pulls you in right at the word go. When a stranger shows up at Stone’s door with a book that exposes the truth about the god’s of City, Stone and Megan are right back in the thick of things.
This one hit a slight hiccup in the middle, dragging out just a bit too long for me, but once Stone and Megan arrive at the church of “Walforg”, we’re in for a load of awesome.
Stabile does a great job tiptoeing around some existential religious questions here adding a layer of depth to the story. His Walforg worshipers are definitely the most interesting and brutal bunch of antagonists in Stone Work.

Overall, Stone Work showcases Stabile’s imagination and his ultimate creation, Stone. Part of writing is making the unbelievable believable and getting away with it. Stabile succeeds over and over within these pages. At times, the story had me thinking of Simon R. Green’s excellent Nightside series. That’s a plus in my book. I can’t wait to see what Stone adventures lie ahead. Take me to City and show me the truth!

I give Stone Work 4 stars! 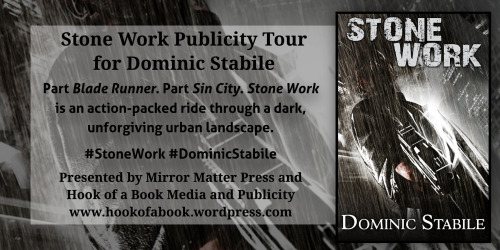 City stands in the irradiated dunes of America, nearly two centuries after the Final War. The wall surrounding it is a buffer for the wasteland inhabitants who covet entrance, and a trap for the citizens smothering in its polluted air and drowning in its blood-filled streets.

Stone is a criminal for hire. Robbed of his loved ones and scarred almost beyond recognition, he navigates City’s darkest corners, doing some of its darkest deeds. In this collection, he’ll pursue an elusive thief, bent on raising an army of juiced up mutants. He’ll break into the office building of a mysterious corporation, only to find the executives are less into sending faxes and more into performing hexes.

In the final chapter, he’ll track a man through the Alleys of South City with the help of his tech savvy partner, Megan, and together they’ll face the sentient darkness of City’s deepest underbelly, and confront the violent potential of City’s most dangerous cults.

Part Blade Runner. Part Sin City. Stone Work is an action-packed ride through the rain-slicked streets of a dark, unforgiving urban landscape, rife with sadistic criminals, inter-dimensional abominations, and a creeping darkness that seeks to erase the last, now almost mythical traces of human goodness left in a world always teetering over the edge of its own extinction 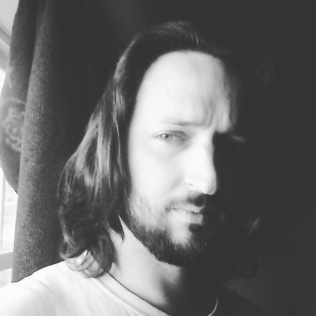 Magazine, The Horror Zine, Atticus Review, Far Horizons, and has been adapted as a radio play by Manor House Productions.

He has held jobs as a warehouse worker, cashier, bookstore associate, textbook manager, and carpenter. He’s a born southerner, transplanted to Penobscot, Maine by a desperate desire to escape retail work.

When not writing or reading, he enjoys horror, sci-fi, and noir films, westerns, and bourbon.

Read his blogs on all things horror at dominicstabile.com or via Facebook.

“With Whiskey for Breakfast, Dominic Stabile provides a page turning mystery that kept me guessing as to who the real killers might be….”- Brenda Casto, Readersfavorite.com

“I loved the quick pace and witty dialogue. The writing style brought to mind old school murder mystery novels even though the setting is more recent. I can’t wait for the next one!” -Jen Leboeuf, GoodReads on Whiskey for Breakfast

Watch for more links to come!