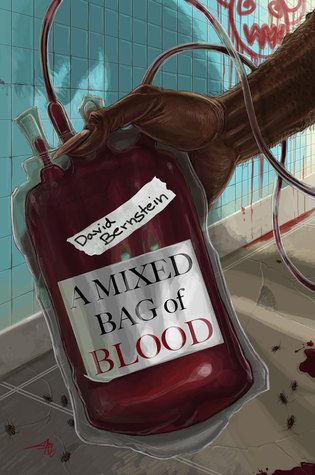 (Review) A Mixed Bag of Blood by David Bernstein

First, let’s begin with a bit about David Bernstein. This guy is one of the busiest, most prolific writers in the horror biz. That could mean that he’s shoveling out every crazy idea he can think of and half-assing his work, or….the guy is just an absolute writing machine. I choose to believe the latter. I’m still acquainting myself with Bernstein’s ever-growing catalog. I’ve read Relic of Death, Apartment 7C, and my favorite thus far, Goblins. All were quality works with Goblins making my top ten of 2015.

He’s got a one of a kind imagination. I mean this guy writes without fear. He tackles anything that his brain conjures up and does so full-on. His characters are instantly real. Their situations, no matter how far-fetched, become our problems.

With his latest release, the short story collection, A Mixed Bag of Blood (Sinister Grin Press, 2016), Bernstein is hitting on all cylinders and ready to take you for the grand tour through his mind of terrors. I’ll give you a rundown on each piece, but whether I give the story a 3 or 5 star rating, know that each and every one had me along for the ride within the first page. That’s a sign of a truly gifted storyteller.

Count me in on the David Bernstein Horror Express!

Next stop: A Mixed Bag of Blood.

If Kristopher Rufty’s forward doesn’t get you psyched up to read these tales, I don’t know what will!

This story has a deep-cutting set-up (not too different from Rufty’s fantastic Desolation), but Bernstein does take it in his own devilish direction. A stuffy that really wolf’s out in an act of revenge.

I liked this one, but it felt a bit rushed and the end came too fast for me. Definitely would’ve had potential as a novella.  3.5 stars

Okay, this one is crazy, but… Remember what I said about real characters and far-fetched situations that become our problems? Yeah, this one is that. Bernstein’s descriptions cause me to hold my nose as if the pain was happening to me. I did that several times while reading this one. He also gives us a fun little explanation on how the “Booglin” came into existence.

“Zombies were the vampires’ cockroach.”

Loved that line. In this tale, we follow Remington, a vampire trying to survive after the zombie apocalypse. Right there! That’s an awesome idea and fantastic set-up. Remington finds his way to a house and he hopes to his first good meal in weeks.  I won’t spoil it for you. It has an ending that reminded me of one of my stories from Slush. This…is a good thing.

Loved this one. 5 stars

I figured out what was going on pretty much at the start of this one. How close can two sisters be? You’ll see. Again, Bernstein presents a tale only his mind could fathom.

I thought it was a great character piece. 4 stars.

This one really centers on a bad seed named, Timmy. He’s not a nice kid. He deserves all that he gets. That’s all I’m saying.

Liked it, but it felt like it should have been bigger. 4 stars.

Wow! Can I give it more than 5 stars????  No, but I would. We get Kenji and his evil brother Makito. We get a great Japanese setting. Samurai action and zombies? I’ve never been a zombie fan, but David knows that in order to make this sub-genre work, you have to put in the extra work to keep it fresh and  engaging. This one succeeds in spades.

Another fantastic idea executed perfectly. This one involves a town,  its curse, and a heck of an ending! I don’t wanna give anything away.

A haunted knife purchased from a yard sale.

This one is short and just okay to me. 3 stars.

Another one of David’s crazy ideas that he still manages to pull you into. An 18 year-old son’s usage of foul language gets him in the shithouse…..he, he, he. His witch of a mother has a lesson to teach him. Will he learn? Read and find out.

A little too gross for my taste, but great if you don’t mind some nastiness. 3.5 stars

A one-night stand leaves a guy with an unexpected gift. You’ve heard and read it a million times, right? Not like this! Loved the beginning, kind of wavered in the middle, but the ending…oh, man. So good!

Overall, I really enjoyed this collection. It definitely made me want to read more from Bernstein. If he writes another collection, I will be the first in line.

I give A Mixed Bag of Blood 4 very strong stars!

A Mixed Bag of Blood synopsis

From a man seeking vengeance for a dead loved one, to a monster lodged in a person’s nose, to starving vampires and samurai battling zombies, a bully meeting his gruesome demise, along with prostitutes being sacrificed, a boy who refuses to stop swearing, and the consequences of one man’s night of unprotected sex comes a dark and disturbing collection of sinister tales filled with dread, bloodshed, humor and the bizarre.

This is a Mixed Bag of Blood.

David Bernstein is originally from a small town in Upstate New York called Salisbury Mills. He now resides in NYC and misses being surrounded by chainsaw-wielding maniacs and wild backwoods people that like to eat raw human flesh. He’s grown used to the city, though hiding bodies is much harder there. He is the author of Amongst the Dead, Damaged Souls, The Tree Man, Witch Island, Relic of Death, Apartment 7C and the forthcoming Episodes of Violence. David writes all kinds of horror, from hair-raising ghost stories to gore-filled slashers and apocalyptic tales of terror. He loves hearing from his readers. You can reach him on Facebook, at www.facebook.com/david.bernstein.3. Visit him at his website: davidbernsteinauthor.blogspot.com email dbern77@hotmail.com, or on Twitter at @Bernsteinauthor.

Praise for A Mixed Bag of Blood

“Dave Bernstein let his mind wander and his pen write where I know you’ll want to read. With an introduction by Kristopher Rufty, this is a reason to stay at home and read on a pleasant Saturday afternoon like I did.” –Cat After Dark
Praise for David Bernstein

“David Bernstein delivers a fast-moving tale of desire and destruction that gives new meaning to the words, ‘Be careful what you wish for.’ Relic of Death twists reality and will leave you reflecting on your own personal Achilles heel long after you finished reading…” —Allan Leverone, author of Mr. Midnight

“Fast-paced, cinematic, and excellent. Horror fans gather around, it’s time for another chilling tale from David Bernstein.”  —Keith Deininger, author of Within and Ghosts of Eden

“A harrowing, brutal thriller, Skinner is Bernstein at his best!” —Peter Giglio, author of Shadowshift