I usually get to meet new authors and get to know them through these interviews, this week’s guest is a bit of a different story.  We attended the same high school in Central Maine. We never hung out or anything, but after I started writing a few years back, we commented on the same Facebook post of a mutual writing friend. We talked about our love for the Bunnicula series of kid’s books. Then we realized we went to the same high school and she was friends with my cousins that were a couple years behind me. Small world!

Flash forward to World Horror Con 2013 New Orleans and then 2013 AnthoCon. We had some drinks and talked horror and books and the publishing world. She also beta read and edited a couple of my early short stories. And thus, a mutual respect and friendship was forged.

This month, Kristin Dearborn unleashes her excellent new novella, Woman in White. I demanded an interview with the talented Ms. Dearborn and was eventually granted the opportunity. 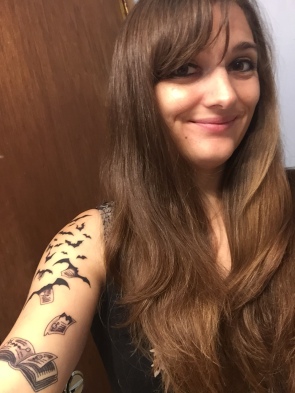 Do you think they did something to us there?

Kristin Dearborn: I don’t know…rural school, not too many people, plus those woods out back. You could be on to something there!

StH: You started reading horror pretty early on. I know we’ve previously talked about a shared love of the Bunnicula (Vampire Bunny) series by James Howe, but what were the first couple of grown-up horror books you read…how old were you and how did you get them?

KD: Oh, Bunnicula, I love you so. My parents had horror novels lying around and I got my adult library card at the Hubbard Free Library (I’m gonna go to town name dropping places here, and Glenn and I will get all nostalgic and the rest of you will just be confused) when I was pretty young. I don’t ever remember anyone telling me, “no, you can’t read that book.” Movies I was pretty locked down on. I remember having to go to a friend’s house to watch all the Tarantino movies, and most of the classic horror works of art I didn’t see until I was in college or older. But I digress. My mom got Jurassic Park for my dad for Christmas the year it came out (I was 8), and it’s the only book I can remember the three of us all reading and enjoying. Darkfall by Dean Koontz made an impression on me, as did Children of Night by Dan Simmons. Everyone seems to think Summer of Night is the superior book, but I disagree. I wish I could tell you the first Stephen King book I read, but I honestly don’t remember which one it was.

StH: When did you decide to take writing seriously and which story was it that you wrote that made you go, “Oh, this is pretty fucking good”. I know for me, I’d written a bad version of Blood and Rain, but when I started my novella, Abram’s Bridge…. It had this surreal I wrote  this? vibe. Is there one of those magic moments for you, a short story or larger piece maybe?

KD: When I wrote Stolen Away, I felt like I was a conduit for the words coming from somewhere else. It required a really light touch editing, and it just flowed. I’d written 80,000 words of rambling garbage about ten years earlier on the same topic, and shoved it in a drawer, and then, while watching Breaking Bad I thought about those characters from so long ago. They’d matured in the time I was away, and the ideas more refined. I had a few 10,000 word days writing that one, and the whole book felt like magic. 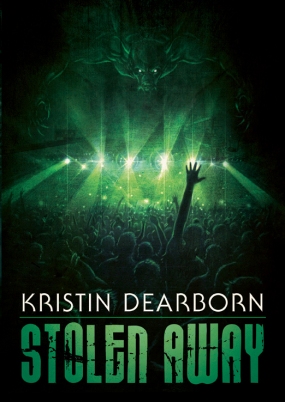 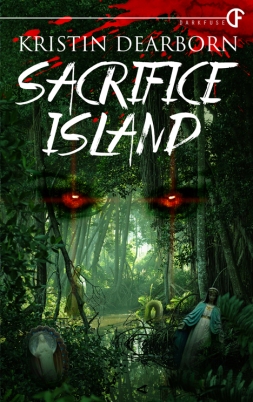 StH: I loved your previous novella, Sacrifice Island.  I’ve always wanted to travel across the world (Haven’t made it out of the US yet). You did some research for this one that included taking a trip overseas? Is that accurate or am I mixing something up.  And if it is true, can you really get a good feel for another culture in 1 to 2 weeks?

KD: I did spend two weeks in the Philippines in 2012, and I would argue you can not get a sufficient feel for the place in that short of a time. I spent two months in Egypt in 2011, a place I’ve visited in a short story (“Catacombs,” published in +Horror Library 5+) and an as of yet unpublished untitled novel. I spent eight months in South Korea around that time. With all that travel, I still don’t think I have enough of a feel for any of those places to write from the point of view of a native. Most of the writing I do about exotic locales I write from the point of view of a visitor, a stranger in a strange land.

StH: You have a book with Thunderstorm Books (Stolen Away). How did this deal come about and is there more on the way between you and Thunderstorm?

KD: Thunderstorm is great to work with, I had a really good experience with them. I don’t have anything currently up my sleeve, but I wouldn’t discount something coming in the future. The deal came about the way I’m pretty sure most everything in this genre comes about, a conversation with another writer at a bar. 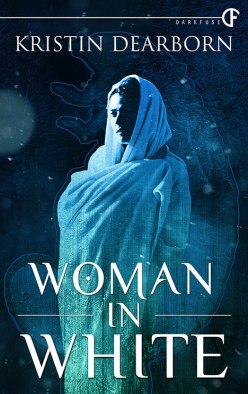 Okay, let’s talk about your current work, Woman in White. First off, holy shit is this good. Love the made up Maine town (Rocky Rhodes). I feel like I’ve been there. Love the isolation, the cold, and the creature we encounter. In my review I said it was like you took a dash of Carpenter’s The Thing and King’s Dreamcatcher and mixed it with a good healthy heaping of Dearborn…. How does that sound to you? And what made you write this story?

KD: Stop it, you’re making me blush. This book came about from a combination of reading Christopher Golden’s Snowblind and a trip to the Maine State Crime Lab where a friend of mine works. She got me a behind the scenes tour, and at the time I didn’t have a current work in progress, so my mind was kind of an open slate.

I’ve always loved “winter” stories, The Thing and Dreamcatcher like you mentioned, Dan Simmons’ The Terror, Malfi’s Snow…I could go on and on. I knew I wanted to write a winter book, and something about the blood analysis in the crime lab sort of clicked together for me. The finished book has very little to do with my trip to the lab aside from Lee working there and looking at blood, but it would have been impossible to write without my visit.

As writers, artists, we always pull from experiences, but this one feels very personal to me.  Something about each character seemed to dig in beyond your average hero/sidekick/friend/ villain type. Did you find yourself going a little deeper with this one?

KD: I guess I did offer up a little bit of myself for each of the protagonists, Angela, Mary Beth, and Lee. I think it’s worth examining pretty closely how women are treated in horror fiction, and I wanted to write something where the ladies weren’t victims, weren’t passive bystanders. Some of the characters probably would have been happier in that role, but circumstances thrust them into the role of hero. I wanted to write a feminist horror story which didn’t feel like it was beating the reader over the head with the message.

StH: We’ve talked off the record about your future works. Even then, you keep pretty tight-lipped about any of these upcoming projects. Is there anything coming up that you can discuss?

KD: Lots of stuff coming up in 2016! This is gonna be a heck of a year. The paperback and ebook of Stolen Away will be out in June from Raw Dog Screaming Press. I’ve known those folks socially for a few years and am over the moon to get a chance to work with them. Coming this fall is a novella, Whispers, coming from Lovecraft eZine. This story is a modern re-telling of Whisperer in Darkness, the only H.P. Lovecraft story set in Vermont. I’m really excited for that one, as well, which will be out in paperback and ebook. There are some other treasures coming down the pipeline, but those ones I can’t talk about.

StH: And lastly, have you been, or do you believe you’ve ever been abducted by extra-terrestrials?

KD: Much like some of those upcoming 2016 releases, I can’t talk about that, Glenn. If I told you, I’d have to kill you, and nobody wants that. Thanks for your kind words and for taking the time to interview me. Go Bulldogs!

StH: Thanks for taking the time, Kristin. Best of luck with Woman in White. It’s terrific. 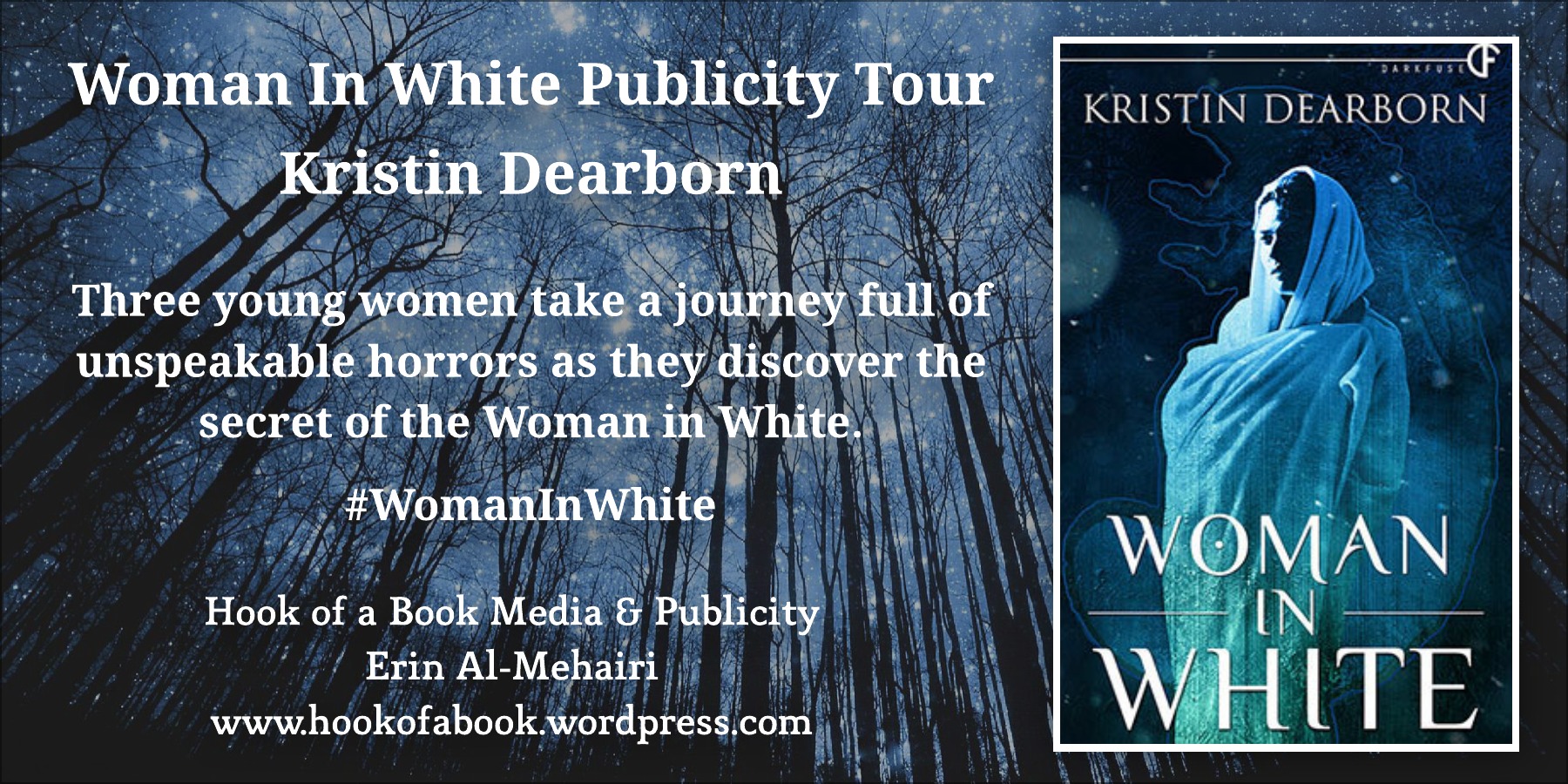 Woman in White by Kristin Dearborn

As a fierce snowstorm descends upon the sleepy little town, a Good Samaritan stops to help a catatonic woman sitting in the middle of the icy road, and is never seen or heard from again. When the police find his car, it is splattered in more blood than the human body can hold.

While the storm rages on, the wave of disappearances continue, the victims sharing only one commonality: they are all male. Now it’s up to three young women to figure out who or what is responsible: a forensic chemist, a waitress struggling with an abusive boyfriend, and a gamer coping with the loss of her lover.

Their search will lead them on a journey filled with unspeakable horrors that are all connected to a mysterious Woman in White.

“Horror born straight from a nor’easter, Dearborn’s Woman in White is a great read for a winter night—with a monster I’ll never forget.” —Christopher Irvin, author of Federales and Burn Cards

“Kristin Dearborn’s Woman in White is a rip-roaring monster tale with sharp-eyed characterization and something to say about the power dynamics between men and woman. Thought-provoking and entertaining as hell!” —Tim Waggoner, author of Eat the Night

If it screams, squelches, or bleeds, Kristin Dearborn has probably written about it. She’s written books such as Sacrifice Island (DarkFuse), Trinity (DarkFuse), and had fiction published in several magazines and anthologies. Stolen Away was recently a limited edition offered from Thunderstorm Books, which sold out. She revels in comments like “But you look so normal…how do you come up with that stuff?” A life-long New Englander, she aspires to the footsteps of the local masters, Messrs. King and Lovecraft. When not writing or rotting her brain with cheesy horror flicks (preferably creature features!), she can be found scaling rock cliffs or zipping around Vermont on a motorcycle, or gallivanting around the globe. Find more on Kristin athttp://kristindearborn.com/.