REVIEW: Island of the Forbidden by Hunter Shea 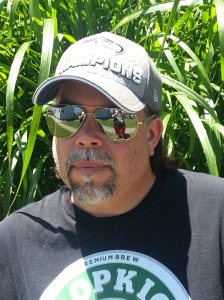 Hunter Shea has definitely become one of my favorite authors. Prior to last year, I had never read any of his works. I started at the beginning of 2014 with his fantastic novella, The Waiting (Samhain Publishing). I followed that with Sinister Entity (Samhain Publishing) and then with his Pinnacle debut, The Montauk Monster.  The man has his own style. It’s simple, yet well-written, stories that flow with ease. Mr. Shea graciously walks you through adventure and mystery, all the while, tickling the hairs on the nape of your neck and filling the pit of your guts with lead.

It’s this “I’m your friend who just might make you wanna sleep with the lights on” relationship the author builds with us that keeps us comfortable, but not too comfortable, and on our toes throughout his work.  I find that an extremely admirable ability. 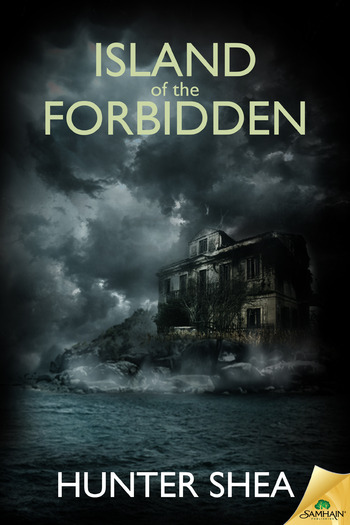 Hunter Shea’s latest novel, Island of the Forbidden (Samhain, 2015), is another perfect example of the writer’s easy-access style. Island… is actually the third in a series of novels (all released from Samhain Publishing) and follows the two central characters from its predecessor, Sinister Entity. No worries if you haven’t read Sinister Entity, or the first novel, Forest of Shadows. I’ve told you, Hunter Shea is willing to take your hand. You can step into any of these three novels and not be lost or have that feeling that you’ve missed something. This is intentional. Hunter has stated in a few different interviews that it is something that he is very cognizant about. He gives just enough backdrop to fill you in without overwhelming you with the entire backstory. Like I said, I read Sinister Entity (book 2 in the series) and felt like it was a complete standalone novel. Island of the Forbidden is the same way.

This story follows Jessica and Eddie from the last novel. Jessica is trying to distance herself from Eddie because when they’re together, their two gifts are too powerful, too overwhelming. After the events with a powerful spirit the two faced together in New Hapshire, Jess is compelled to run from her gifts, her family, and her friends; Eddie also ends up disappearing into his own defeated world. But when three mysterious and beautiful spirits start showing up everywhere Eddie goes, saying Perfect, not perfect, Eddie starts to realize there’s something calling him. He is contacted and told of a family and their children who need his and Jessica’s help. He manages to track down Jessica and convince her to come back.  She resists at first, but ultimately, it’s the safety of the children involved in this new mystery that pulls her back into working with Eddie.

Ormsby Island is home to a legacy of death and bizarre happenings. The last of the Ormsby men is dead, and the small island and its glorious home, remain uninhabited. Except for the ghosts.  A young couple and their two children purchase the home (and its land), but get more than they bargain for.

Hunter Shea puts together a terrific cast of characters and builds this amazing story around a sinister family and their deplorable past. You will want to fight some of these people yourself! I know I did. There’s ghosts, there’s mystery, there’s some soft hearted moments, and there’s a boat load of suspense! This one is definitely worth reading. Go grab a copy today in Print or eBook from Samhain Publishing.

For much more on Hunter Shea and Island of the Forbidden check out the info below.

Island of the Forbidden by Hunter Shea continues the story of Jessica Bockman, the ghost-hunting heroine who has appeared in Forest of Shadows, The Graveyard Speaks and Sinister Entity, all published by Samhain Horror.

To read more about the series and Jessica Bockman, read Hunter’s recent article.

Island of the Forbidden Synopsis

Sometimes, the dead are best left in peace.

Jessica Backman has been called to help a strange family living on a haunted island in Charleston Harbor. Ormsby Island was the site of a brutal massacre two decades ago, and now the mysterious Harper family needs someone to exorcise the ghosts that still call it home. The phantoms of over one hundred children cannot rest.

But something far more insidious is living on the island. When the living and the dead guard their true intentions, how can Jessica discover just what sort of evil lurks on Ormsby Island? And why is Jessica the only one who can plumb its dark depths?

Enter to win one of five Hunter Shea books being given away! Two signed copies of Montauk Monster, one signed copy of Sinister Entity, and two e-books of choice of his titles are up for grabs! One book to each winner, given in order of random drawing. Enter to win at the Rafflecopter link. Must use valid email that winners can be contacted by. Print books are U.S. residents only. Contest ends Feb. 28, 2015. Any questions, contact Erin Al-Mehairi, Publicist, at hookofabook@hotmail.com.

“A frightening, gripping story that left me too frightened to sleep with the lights off. This novel scared the hell out of me and it is definitely a creepy ghost story I won’t soon forget.” —Night Owl Reviews

“This is the real deal. The fear is palpable. Horror novels don’t get much better than this.” —Literal Remains

“. . .Culminates in a climactic showdown between human and spirit that keeps you glued to the pages!” —Horror Novel Reviews

“Hunter Shea has crafted another knockout. At turns epic and intimate, both savage and elegant. . .a harrowing, blood-soaked nightmare.” –Jonathan Janz, author of The Sorrows

“If you’re craving an old-school creature-feature that has excessive gore. . .B-horror movie fans rejoice, Hunter Shea is here to bring you the ultimate tale of terror!” —Horror Novel Reviews

Hunter Shea is the author of paranormal and horror novels Forest of Shadows, Swamp Monster Massacre, Evil Eternal, Sinister Entity,  HellHole and Island of the Forbidden, which are all published by Samhain Horror.

The June 3, 2014 release of his horrifying thriller Montauk Monster was published by Kensington/Pinnacle. His second Kensington novel, Tortures of the Damned, will be published later this year.

He has also written a short story to be read prior to Sinister Entity, called The Graveyard Speaks (it’s free, go download!), and a book of stories called Asylum Scrawls.

His work has appeared in numerous magazines, including Dark Moon Digest, Morpheus Tales, and the upcoming anthology, Shocklines : Fresh Voices in Terror. His obsession with all things horrific has led him to real life exploration of the paranormal, interviews with exorcists, and other things that would keep most people awake with the lights on.

He is also half of the two men show, Monster Men, which is a video podcast that takes a fun look at the world of horror. You can read about his latest travails and communicate with him at http://www.huntershea.com, on Twitter @HunterShea1, Facebook fan page at Hunter Shea or the Monster Men 13 channel on YouTube.